OPERATION SECOND CHANCE - JAIL DOGS
Bandit's Story
When Bandit arrived at the jail, he quickly became a great fit. Quickly bonding to his handler, making new friends, and adding a great vibe to "1C" the Jail Dogs dorm in the Gwinnett County Jail. After getting his veterinary exam, everyone found out that our newest member is heart worm positive. The Jail Dogs Staff signed up Bandit for the expensive, painful treatment. This treatment is a series of three shots that are given in the muscles in the back. They are given over a span of 3 months and the side effects are harsh and include everything from pain and swelling on the injection site to lethargy and flu like symptoms.
Bandit, however suffered something much worse; paralysis of his lower extremities. At first we all assumed this was something acute or temporary. We were wrong. His condition not only persisted, it got worse. He has to be manually expressed in order to urinate and eliminate his bowels. This has been done by his inmate handler. This handler is responsible for Bandit's care 24 hours a day, 7 days a week.The handler does not get weekends or holidays off and is on the clock with Bandit all hours of the day. These tasks include carrying Bandit's hind legs while he walks around and performs dog duties, such as sniffing around and interacting with other dogs and people. He is also responsible for gently squeezing his bladder externally every time Bandit has to urinate and supporting his back legs while poor Bandit takes a "Number 2."
After three months of this, Society of Humane Friends of Georgia, the rescue organization that runs Jail Dogs, put their resources together and  purchased Bandit's new "legs." These legs are custom fitted with wheels that allow him to live a normal life now. Please look below to see a couple of photos of bandit enjoying his new freedom and the ability to go where he pleases.
As you can see there is hope for every dog! Hope, however comes at a cost. We can only achieve this type of care and customized treatment with generous donations from supporters and the valuable time from the volunteers who manage to find the extra hours in the day to foster, drive dogs to appointments, and meet the potential adopter who rescue our little mongrel dogs and turn them into true fur-babies. 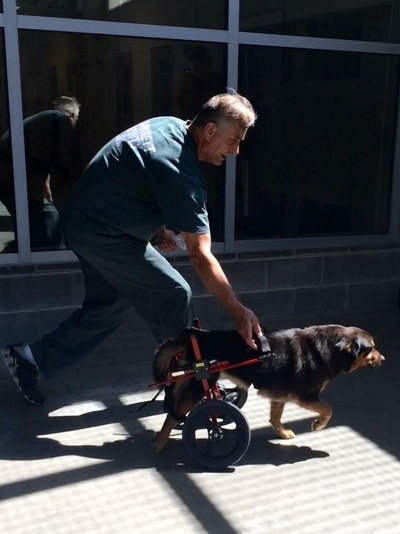 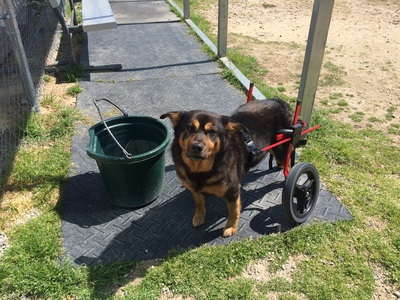 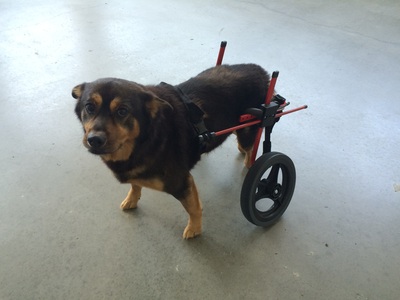 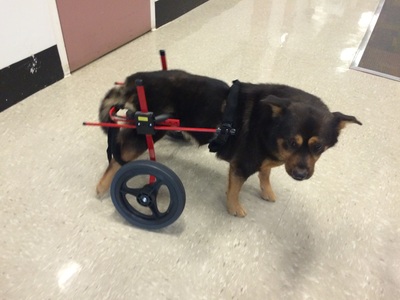